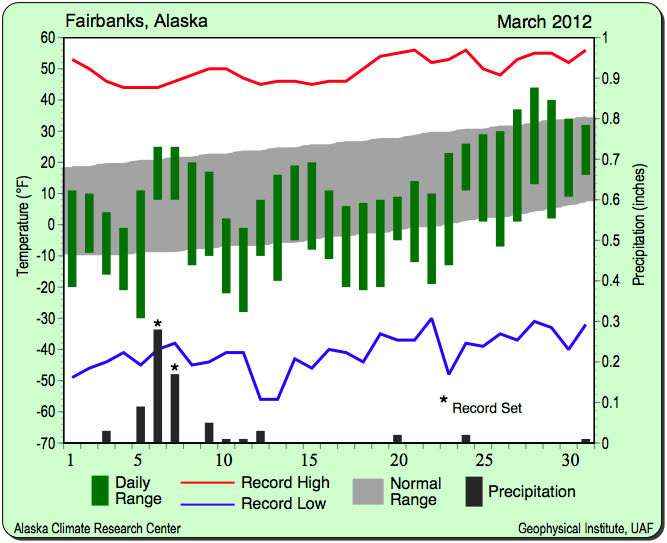 In Fairbanks the average March temperature was 4.5°F, a substantial 6.9°F below the long term mean. Furthermore, the mean temperature was colder in March than in February, a relatively infrequent occurrence. The high temperature for the month was 44°F on the 28thMarch, while the lowest temperature was a frigid -30°F observed on the 5thof the month. For most of the month, the temperatures were below normal with the exception of the last week. No new daily records were set.

Precipitation in March was far above normal with 0.72" water-equivalent, which is close to 3 times the long-term mean of 0.25". Snowfall (14.7") was exactly 3 times of normal, which is for March 4.9". Precipitation on the 6thand 7thof the month was remarkable and set new daily records. On the 6th, 0.28" water-equivalent snow fell, slightly more precipitation than expected for the whole month. It is also a new record for the day, surpassing the old record from 1985 of 0.24". Snowfall for this day was 6.9", also substantially surpassing the old record of 3.5", set in 1943. On the following day, 0.17" were measured, once again a new daily record, as the previous maximum was 0.15", which occurred in 1967. The snowfall for this day was 2.7", tying the old record of 1932. This event was caused by strong advection of relatively warm and moist air from the west, with a slight southerly component. On the 6ththe highest peak wind speed of 23 mph was recorded, and the mean monthly wind speed was 3.9 mph.