Alaska’s climate varies wildly by region and season from a temperate maritime climate at 51º north to the Arctic climate of Utqiagvik at 71.3 º northern latitude. Depending on latitude, elevation or a location adjacent to sea or inland, a multitude of very different climate zones are predominant.
Alaska’s climate is changing at unprecedented pace; check out our Alaska Climate Change page.

With approximately 6,640 miles of coastline and the surrounding waters: the Beaufort Sea to the north, the Chukchi Sea to the northwest, the Bering Sea to the west, and the Pacific Ocean to the south, a significant portion of Alaska is influenced by ocean waters and the seasonal distribution of sea ice.

The ocean has a moderating influence on the climate of coastal regions, which have warmer winters and cooler summers, as well as smaller diurnal (daily) temperature ranges.

Conversely, inland and locations cut off from the moderating influence of the waters experience a continental climate.

When the seas are ice-covered, the maritime influence is significantly less than when the water is ice-free.

The maximum sea ice extent in Alaska usually occurs in late February or March, near the end of the winter season. The sea ice melts over the course of the summer and reaches a minimum extent in August or September.

Covering an area of 570,374 square miles (1,477,262 sq. km) and almost 20 degrees of latitude from about 51°N to 71°N, the spatial coverage of Alaska is quite expansive. Given the high latitude environment, the state experiences extreme seasonal variability in solar radiation. 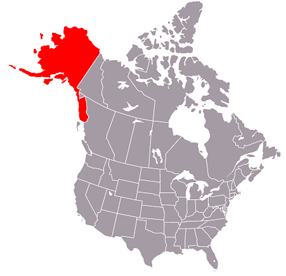 North of the Arctic Circle, the sun does not set in midsummer (the “Midnight Sun”) but remains continuously above the horizon. The number of days on which this occurs increases from south to north (see figure).

In winter, darkness dominates (the “Polar Night”). North of the Arctic Circle, around the winter solstice, the sun does not rise above the horizon.

Another latitudinal factor that affects climate is solar elevation: the angle between the horizon and the sun. Even during the long summer days, the solar elevation angle is relatively small, and the sun is never directly overhead.

The altitude above sea level influences the climate of a given area. Lower elevations in interior Alaska, such as the Yukon Flats and the Tanana Valley experience extreme cold in the winter as well as high summertime temperatures. Additionally, temperature inversions are frequent in winter, in which the lower atmosphere is essentially decoupled from the upper levels. This generally occurs under clear skies, and when winds are light and surface temperatures are extremely low. However, locations only a few hundred feet above the surface can be significantly warmer. In other parts of the state, such as the southern coast, locations at high elevations receive much higher precipitation and temperatures are generally cooler. 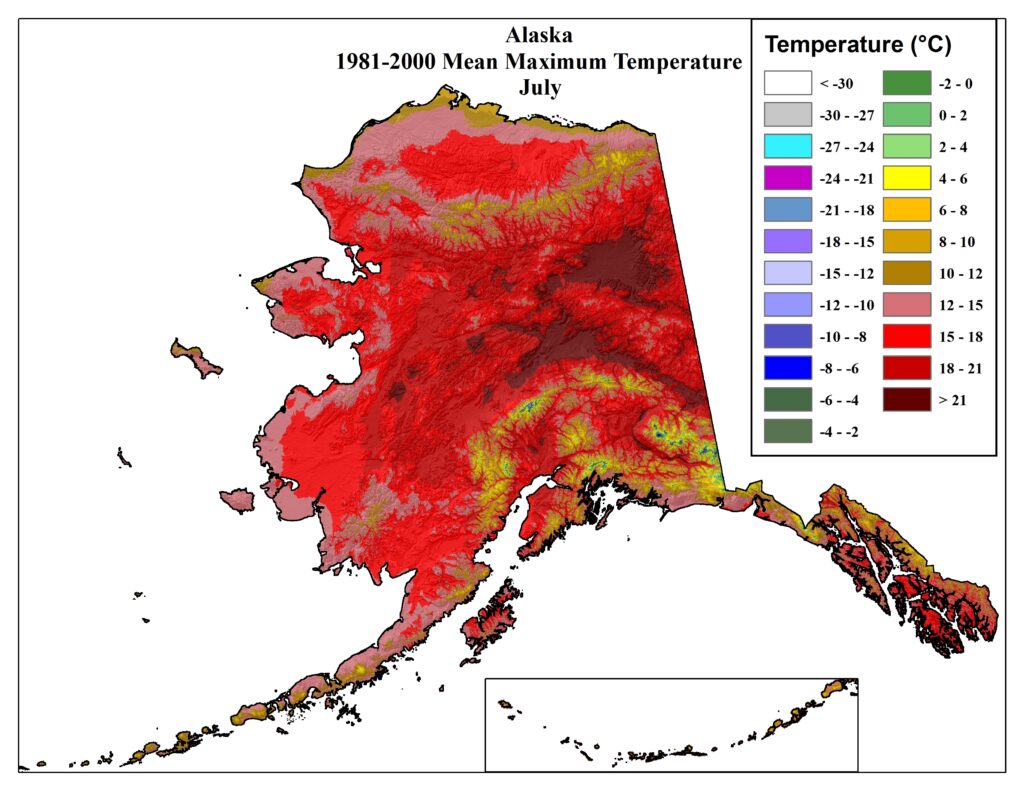 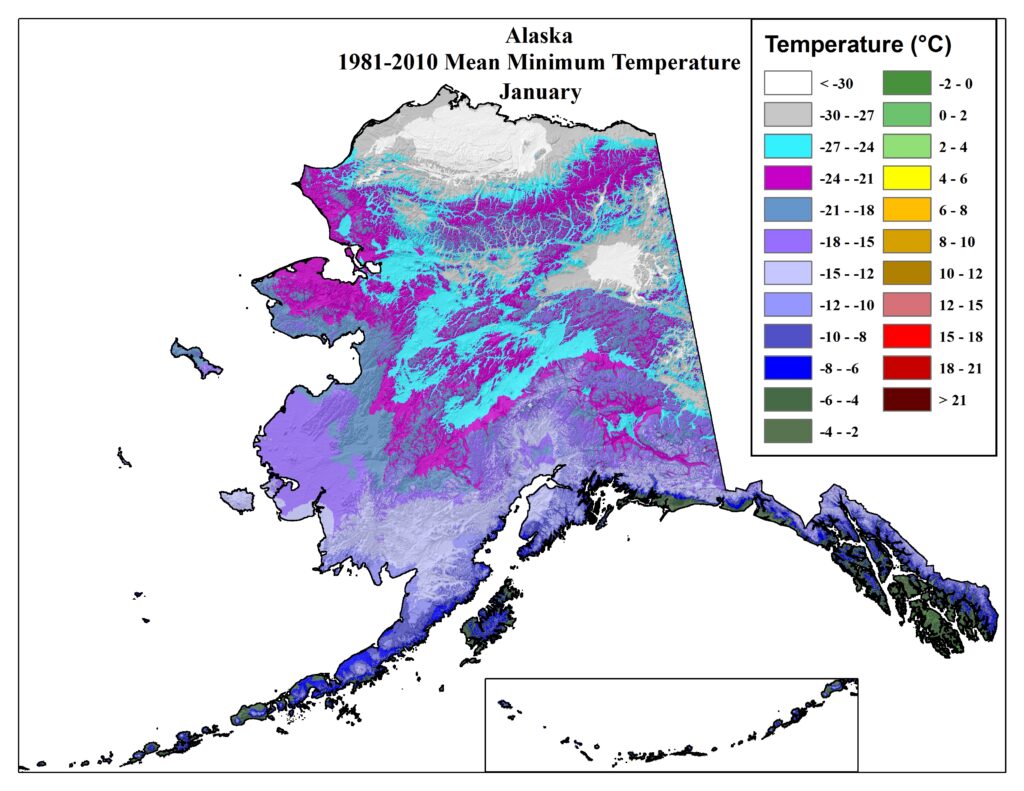 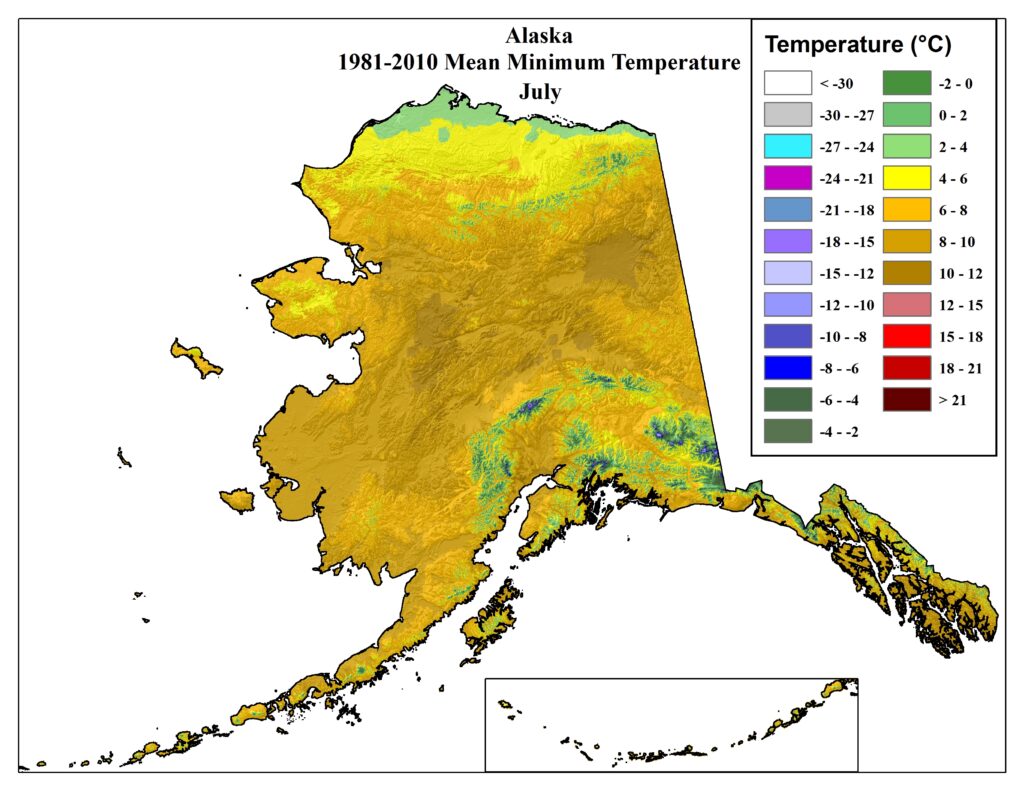 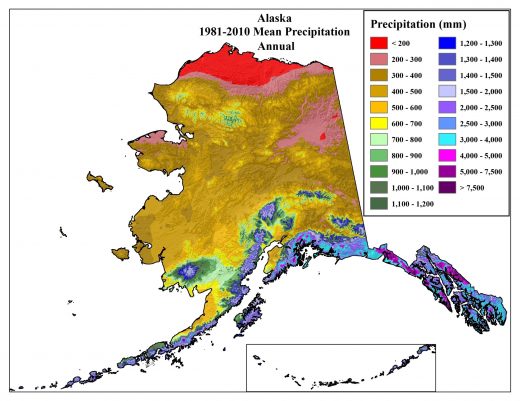 Based on temperature and precipitation averages, the state of Alaska can be divided into five major regions of similar climate. Read more about them in detail below.

The Arctic region is bounded to the south by the Brooks Range and to the north by the Arctic Ocean. The mountains provide a natural barrier that separates this region climatically from the rest of Alaska. Climatic differences within this zone occur between locations along the coast and inland areas, with the latter experiencing more of a continental-type climate with warmer summers and cooler winters. Mean annual temperatures in the Arctic are well below freezing with winters as long, cold and with high winds and blowing snow. Precipitation in this region is quite light, most of which falls in the summertime. However, precipitation is normally underreported as winds are strong and the collection efficiency of measuring gauges is less than 100%. Winds in the Arctic are strong along the coast with a prevailing direction from the east for most of the year. During the short summer, westerly winds increase slightly in frequency.

The Interior of Alaska is bounded by the Brooks Range to the north and the Alaska Range to the south. This region encompasses the largest area of the state and the terrain includes both river valleys and highland areas. The climate here is continental with large temperature variability, low humidity and relatively light and irregular precipitation. In general, summers are warm and sunny while winters are very cold. Although it is not geographically part of the Interior, the high plateau of the Copper River Basin, south of the Alaska Range and north of the Church Mountains, has a similar continental climate. The Interior experiences some of the mosts extreme temperature variability in the state. In urban areas and around natural hot springs, ice fog – a type of fog made up of suspended particles of ice – is common in winter, sometimes lasting from several days to a week. Winds are generally light in the valleys, with higher wind speeds in the summer. Big Delta is a notable exception as winds here are highest in the winter. Much of the region’s annual precipitation falls in summer as sporadic rain showers or thunderstorms. Typically there are days of intense lightning outbreaks during the summer which bring the risk of wildfires.

The West Coast region of Alaska spans a large area and can be subdivided into two smaller regions: the mainland area along the Bering Sea coast (West Central) and the Aleutian and Bering Sea islands (Southwest Islands). These areas have a maritime climate that is strongly influenced by the Pacific Ocean, the frequent storms moving through the area during autumn and winter, and the seasonal distribution of sea ice.

There is no natural topographic barrier on the eastern edge of the West Central region to separate it from the continental climate of the Interior. The eastern extent of maritime influence largely depends on the time of year and type of weather situation affecting the area. Mean annual temperatures are similar to those found at the same latitudes in the Interior and are below freezing. The Aleutian Island chain extends several hundred miles out into the Bering Sea. This region has a maritime climate as well with mean annual temperatures generally above freezing. Temperatures are less variable here than in areas further north and precipitation is heavier. High winds are common here throughout the year especially during the autumn and winter when storms move across the Bering and affect the West Coast. The areas south of the Aleutians is home tot he Aleutian Low, a semipermanent low pressure feature that dominates all but the warmer summer months.

These regions of Alaska represent an area of transition between the maritime climate of the southern coastal areas and the continental climate of the Interior and Copper River Basin. They are largely protected by mountainous areas and therefore do not have a strong maritime influence. The only direct path for ocean influence is from a southwesterly direction through the open waters of Cook Inlet and Bristol Bay. Compared to areas with a strong continental climate, temperatures are moderate here – they generally do not get as warm in the summer or as cold in the winter. One of the state’s larger agricultural regions is located here – the Matanuska Valley north of Anchorage – with a growing season of 100 days.

Although sea ice does form here, complete freeze-up of the waterways is not common. In general, areas further inland, like Talkeetna, experience both lower temperatures in winter and higher temperatures in summer, than areas further south. The period of highest precipitation is August and September with rainfall occurring on about half the days in this period and thunderstorms sometimes occurring. Large-scale organized storm systems affect this area from late summer through winter and can be accompanied by high wind events.

The southern coastal areas, which border the Gulf of Alaska, are under a strong maritime influence with high annual precipitation totals and moderate temperatures. This large area can be subdivided into two smaller regions: the South-central and the Southern Panhandle. Due to the complex mountainous terrain in this area, weather conditions can vary substantially, even between places in close proximity to each other.

The state’s highest average annual temperatures are found here, generally in the far southeast, while the highest annual precipitation is found along the Coastal Range. The ice-free Gulf of Alaska keeps temperatures relatively warm here during the winter, with little seasonal snow cover at locations near sea level and daily high temperatures generally above freezing. There are some exceptions, though, like Valdez and Haines, where subfreezing temperatures are more common and winter snow depths can be quite high. Summers are generally cool and cloudy along the southern coast, with moderate temperatures and few extreme warm days. Heavy snowfalls occur along the coast as the warm, moisture-rich Pacific air is lifted over the coastal mountains. Local winds are strongly affected by the landscape features, ocean-land temperature contrast, and any synoptic-scale weather feature moving through the area, such as a low-pressure system. Higher winds are more common during the autumn and winter than the spring and summer.